Blog-MCiT Insights – IT lecturer at the pulse of time

We met Aleksander Groth in a small Café in Innsbruck to talk about his life before and during the MCI.

Mr. Groth tells us that he is working fulltime as a professor at the Bachelor’s and Master’s degree course Management, Communication & IT. Specifically, he teaches in the fields of Scientific Methods and Human-Computer Interaction or rather Digital Behavior.
But that is not enough, Mr. Groth also works in the research and development section and organizes projects with different companies, for students to profit from.

Of course, we want to know what Mr. Groth did before he went to the MCI. What and where did he study?

“CD-ROM […] That was the great medium at that time. The multimedia medium!”

Everything began with his study “international business sciences” at the University of Innsbruck and ended with a degree in business administration. While he was studying business administration, he also learned a foreign language, Russian – just like that. His passion for IT has followed him a long time. In the middle of the 90s, he bought his first computer, the first “Pentium”. Back then, there was no internet to google for help. You had to read a book to learn something. “’95 the university already had basic internet, and I was very interested in creating websites by myself. I really liked it and have never stopped doing that.” Through common acquaintances at university, he met Peter Mirski, our course director, who needed help to create a CD-ROM. “CD-ROM […] That was the great medium at that time. The multimedia medium!” For a project, Mr. Groth created the desired CD-ROM and immediately got a job offer from the MCI. He changed to the fulltime job at the MCI in the IT section and worked as a Web- and Multimedia designer.
During his time at the university, he liked to share his knowledge with others and started to teach CSS and HTML. Between 2006 and 2009, Mr. Groth and Mr. Mirski developed, as a project, the specifications “User Experience Design” and “Usability”, which became part of the degree course. Also, a research theme called “Digital Interaction” became part of the degree course, which was developed together with Stephan Schlögl, another professor of MCiT.

Mr. Groth explains why he likes to work at the MCI. “Because it is a great job.” “Great” means for him that his work is always changing and new. The contents he taught the students two years ago may already have changed, and he can only use some parts of them for lectures today. The application situation is always changing, and what is current today could be useless in a few years. That is the exciting thing for him, he doesn’t like stagnancy, and that is what the MCiT also stands for Innovation. You must not sit on your achievements; you should always strive for more and go with the time.

But what does he do after an interesting day at the MCI?
At home Mr. Groth likes to relax, sometimes he needs a break from all his “intellectual” work, he says. His priority is to spend time with his family. In the evenings, he enjoys playing some video games on the computer with his children or alone. But even a good book, preferably from the genres of fantasy or science fiction, has its appeal for him. But also his field of expertise accompanies him home, “which is nice if you have found a job in life that interests you and gives you pleasure.”

We enjoyed the rest of our cappuccinos during an animated talk about video games, before moving on to the next lesson with Mr. Groth.

Do you like this article? Then keep track of what has been published as part of our MCiTInsights campaign. 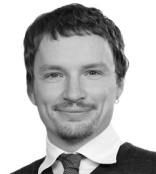